Mr. Ahmadinejad our favorite president and Robin Hood!! of Iranian society finally introduce ministers of his cabinet .
It is a surprisingly cabinet . most of themare from really!! Hardliners and who have experiment in intelligent services of Iran .
For example in the Ministry of Culture and Art (culture and Islamic guidance !) in next 4 years the minister is really terrifying for many of artists and writers.
He was one of major of opposition of reform in 8 years of presidency of Mr. khatami andNow he is minister of ministry which main signals of reform for 8 years were there. Editor of major newspaper of hardliners get his award for his works in last 8 years. if you know idea of Mr. Safarharandi And his friends about culture you more understand what I am talking about . They think always is a enemy behind every problem .so in this sensitive position that related with artists, writers and intellectuals you must agree with me that how dangerous is this theory and persons who believe this theory.. 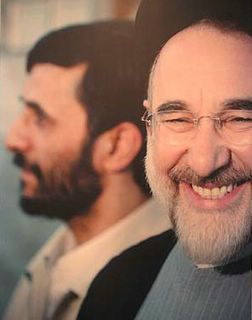