Farshid Faraji, an independent Iranian cameraman, who was arrested by the American military forces in Iraq,” is missing. Faraji, who entered Iraq on May 2nd, 2005 with valid visa and proper documents to complete the filming of the documentary, “In Search of Cyrus, the Great,” does not appear on the Red Cross list. While the Red Cross has registered the arrest of Koroush Kar, the producer of the film, there is no information available about Farshid Faraji’s whereabouts.After shooting scenes in Iran, Afghanistan, Tajikistan, and Turkey, Faraji and Kar entered Iraq, in order to film the historical site of Babylon, but lost contact with their families after the first week of entering Iraq.
Koroush Kar contacted his family and notified them that the he and Faraji were arrested on May 19th, 2005. Farshid Faraji’s family, who is gravely concerned about his safety, has not been able to find any information about Farshid from the Red Cross and the Iranian authorities.Iranian filmmakers and advocacy groups are putting pressure on the Iranian government to take appropriate steps to find Farshid Faraji.
We are asking the United States government to provide Fashid’s family with information about their son’s arrest. We believe that while Farshid is being interrogated, his family has the right to know about his status and his whereabouts.Thank you.

People who are concerned about Farshid Faraji and his family 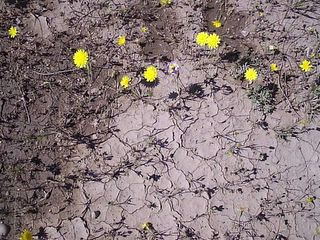 when announced that Ahmadi nejad won the election I confess that I were for hours depressed and thought about what happen next.
Any way he is now president with fraud or without it. I hope next 4 years be better than what I think it will be , and again I hope Mr. Ahmadi nejad don’t drop the ladder WHICH he climb from it.

I really suffer when I saw people who have not enough knowledge to analyze what happen in society and politics these days in Iran.
Many of them believe Ahmadinejad as opposition leader! Especially who have fewer facilities for an easy life and suffer from poverty.
so its predictable when they believe lucky mayor when he objected to some injustices relation in governmental system .they think he is right and is a man from god who want execute justice in society.
but they never think that he is belong to some parts of POWER in Iran which many of these kind of injustice is because of them . They are who lost in 1998 election, but today they are changed their old clothes and came with a new suit.
maybe you said I am insulting people because my candidate failed in the damn election but it is a fact in Iranian society. a society with 67 million population has only 1 million newspapers every day or books have maximum 3000 copy , Only 3.5 million access to (low speed) internet and Only media, which is simple to access, is governmental radio and television. With these facts, it natural when ordinary people dose not understand those complicated words that reformist say for people and they never try to simplified their thoughts for people.

I Never think that someday I force to vote for Hashemi because I terrify another one (Ahmadinejad)
These days in Iran people are frightening many scared about what may happen in next days and many wrote letters: "we support Hashemi in second round election only because we want to say NO to fascism.” A big contradiction in Iranian society.
Lucky mayor decided separate women and men from each other in society (like park, taxies, university classes, and elevator) because he wants protect them!
He also dream that will Execute an economic plan that he named it “Islamic economic”. This plan is like what that be in communism countries.
At last, a strange theory that I read somewhere:
With fraud in election, they brought Ahmadinejad for second round as rival of Hashemi Rafsanjani, because if someone like Moeen second round all of people vote for Moeen instead Rafsanjani. 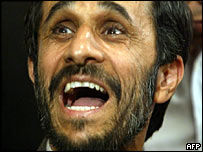 Birds are spinning on my head. The result is really confusing . election go to second round with Hashemi Rafsanjani (that was predictable) but when i found who is his rival, birds start to spin:
Mahmoud Ahmadinejad, mayor of Tehran who is a real extremist conservative.
It is as a nightmare .I really didn't want president of Iran be a man that is like :he never wash himself. And I did not want when in west, claimed that iran support terrorism he was symbol of it.
I will predict in second round, lucky mayor have a more easy challenge with Hashemi Rafsanjani because all supporters of conservatives will vote for him in a big coalition.
At last, I really fell that Iran will be a prison in next months if this ever worst choice became president

I will vote for moeen today but ...

I decided vote for dr.Moeen but last night when I read an article, I really doubted for my imaginations about day after dr.Moeen win election. I know that what Moeen promised people is ideal in theory and make a utopia for Iranians, but in practice do these ideas could be success?

-Do conservatives give up this time or like before resisting against votes?
-Reformists in this last 8 years prove that they are not good manger in although they are good theoretician.
-Is not better if I vote for a pragmatic person that also have good relation with powerful leaders in Iran, someone like Ghalibaf ?
---------------
any way and even with these doubts i voted for moeen cause i found his words honestly.

I prefer my president be...

tomorow is day of electiotin and i wish result be more and more like this:
Moeen >> HASHEMI > Ghalibaf
------------------
Sean Penn is in Iran as a reporter read letter of his friend who is with him in this amazing journey 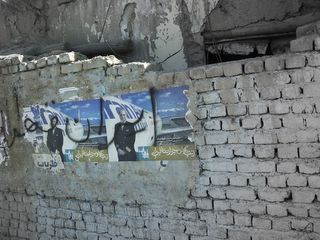 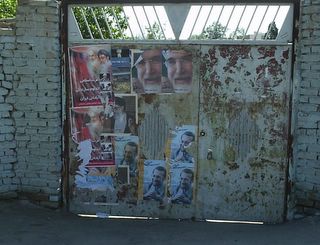 Iran's cities these days cover with posters of candidates .they are smile to people and say: "we will make a different life for you, pls belive us we are changed ,we are not who were before". 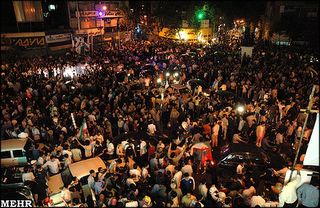 Thanks god. We finally qualified for the 2006 world cup. It was very exiting after the match most of people get out from their homes and wants to be a part of this frenzy celebration. It was like the revolution, which we saw its films in television for yearswith this difference that all of people be in streets not for changing system they were in streets for celebrating a national success even if somewhere this celebration be more like a chaos.

Yesterday match also have other benefits. About 30 women in a civilized movement sit in front doors of stadium and demand and resist on their rights for watching soccer like men in stadium and at last they success again .
Photos.

We are waiting for a national celebration

This Wednesday in Tehran will be an important match between Iran football team and Bahrain.
And if we could beat Bahrain for third time in history of FIFA world cups qualify for this biggest football festival.
President Khatami promised that will attend in stadium on Wednesday. We are getting ready for a street celebration and I hope celebration be without any chaos that happened in Iran in such happenings.
I can see a big celebration on Wednesday night.
Please pray for us that we could beat Bahrain (it is very possible and simple) but if we lose the match (that Iranians are professional to do things which are impossible) I predict turn out in election decrease below 20%.
--------------------
I put a logo in beside of the page to say i will vote for Dr .Moeen.and it said ONLY MOEEN it linked to Nasim . Awebsite from youth who also want vote for Moeen. But if You don’t know Persian don’t click on it.

Why Hashemi become popular among some people in Iran again?

In Iran if you asked people their opinions about Hashemi Rafsanjani, Most of them said: he is ..., he and his relations stole Iran property, and he is godfather of a real mafia.

However, when you asked them: Ok, now which of these candidates you are going to chose as president? many answered: I think I will vote to Hashemi!
I really don’t know why? maybe they think cause Hashemi was one of few man in top level of power in Iran for last 25 years and also he has a independent character in front of supreme leader that is not like other conservative who do what leader order to them . maybe when he again be in executive position it was better than if progressive reformists (that Dr.Moeen reprehensive them ) win election because even if they can success in election they cannot do any thing cause THE power didn’t allow them destroy what they could built for themselves in these years. However, Hashemi is from themselves and is a trusted man so he never betray to them.
Any way nothing it is clear until 17 June, and I hope that day all of predicts will be wrong and Dr.moeen became Iran president for next 4 years.
------
election84 on flicker

In France when people say No to European constitution the Prime Minster resign and appointed a new prime minister .
why? because people say no to an important referendum that wasn’t so related to government .
but Prime Minster resigned (dismiss) because who are in power found that best reference for understanding what people think is votes that they give not demonstration that government set them up.
but in Iran in 1998 when 70% of people chose reformist president khatami conservatives who have real power not even gave up though they resist against people decision and with appointing extremists and rival of reformist in important place of regime try make problem for reformists and people.