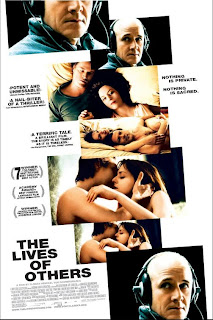 when you are alone in a big house naturally you have more time to watch movie and read the books which you haven't enough time to read and watching them before.

I also started to watch some American series .first season of ugly betty full seasons of sex and city and also 2 seasons of desperate housewives.

last night I watch a weird movie ."Life of others" a film about eastern Germany and secret agents of national security of DDR .the film won Oscar of foreign movie this year.

I have the same feelings that I had after reading 1984.

I really confused and bewildered after seeing similarity of this movie with where I am living .

in film you hear exactly same quotes about country and society and serving to your country with helping to government ,also same agents who have a top access to every angle of life of other people to protect "the country" or similarity of being few model of cars in streets in both countries.