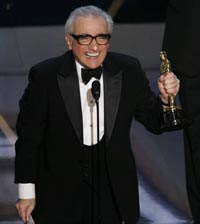 2 years ago i wrote a post that why academy always ignore martin Scorsese' masterpieces and why never give him Oscars that he deserve fhim (for example academy chose rocky instead raging bull in 1980)
But this years I am so glad that academy members read my post! and decide finally give him one of that golden statue .
-----------------------------------
Ps: I must confess that after watching "million dollar baby" and "The aviator" i concluded that Clint Eastwood' movie was better than the aviator.

if your an American citizen today I wanna told you a fact about your government . VOA or voice of America (Persian service) are wasting  your tax money these days.

VOA Persian service television is not a neutrally media for Iranians rather is a media full of lies and news that is not reflect truth.and its programs are more comedy instead a real political program.

people who run  the TV which board casts Washington policy ! are some Iranian men and women that last memory of them from Iran is about 30 years ago when they fled form Iran after revolution and clearly supports monarchy and the last kingdom  density of Iran (Pahlavi).

many Iranians when get  tired from boring TV programs of IRIB and decide to see a comedy program they watched VOA TV programs and laugh to experts who speaks about Iran in roundtables.