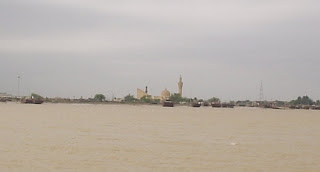 Iraqi port Fave taken on Iran border by me!!!! :D

1. In Iran it is a tradition political prisoners confess in front of camera and broadcast the confession on TV .also Iranian people remember many apology letters from prisoners who were regreted.

It is an old trick that nomore anybody in Iran fooled by it.

2. With all of these facts I really don’t know how I could analyses confession of U.K sailors on TV. I really cannot figure out who ordered to do this stupid response by Iran against pressure of west.

They show UK sailors confession .the captive says words which are like translation of Iranian officials .woman captive everyday wrote a letter which are more similar to letters of Mr. President to Mr. Bush or the letter who he wrote to people of America!

Sincerely I never imagine that Iran acts such stupidly and childish. Iranian persons who run and moderate this crisis are really similar to attitude of followers of Mr.ahmadinejad and his theories.