1) We, a group of Iranian bloggers, strongly condemn the violent and repressive confrontation of Iranian government against Iranian people's legitimate and peaceful demonstrations and ask government officials to comply with Article 27 of the Islamic Republic of Iran's Constitution which emphasizes "Public gatherings and marches may be freely held, provided arms are not carried and that they are not detrimental to the fundamental principles of Islam."

2) We consider the violations in the presidential elections, and their sad consequences a big blow to the democratic principles of the Islamic Republic regime, and observing the mounting evidence of fraud presented by the candidates and others, we believe that election fraud is obvious and we ask for a new election.

3) Actions such as deporting foreign reporters, arresting local journalists, censorship of the news and misrepresenting the facts, cutting off the SMS network and filtering of the internet cannot silence the voices of Iranian people as no darkness and suffocation can go on forever. We invite the Iranian government to honest and friendly interaction with its people and we hope to witness the narrowing of the huge gap between people and the government.

A part of the large community of Iranian bloggers

Where is My vote? 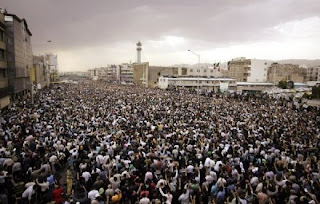 people ask me why i don't write here more especially when Iran is in all of headlines in the world .first of all my weblog is filtered in Iran and then i must confess i wrote a long post in favor of Mousavi before election but good or bad that post accidentally deleted and my silence on my weblog continue .

i voted to Mousavi and to camping for him and tried convince more people to vote for him but it was really hard especially in the district that i live in Tehran, our district is downtown and here many people supported for Ahmadinnejad , here and in villages and small towns ahmadinejad are so popular among people because his campaign speak about corruption!!!in last 30 years so people who suffer from poverty and injustice in their social life see him as a hero .

so victory of ahmadinejad was predictable but what is so mysterious is the number of votes that every candidates could get for example no one could predict Ahamadinejad win election with 24 million vote and Karoubi only get 300,000,000 votes.

anyway results was very mysterious and at least 30% of voters to mousavi came to streets, people who most of them are educated and and want a modern life .they protest with silent rallies for their votes but Government could not tolerant for more than 4 days and on 5th day they repress people violently .they use basij militia to restrain protesters .basij is a people organized militia in Iran and many people who are loyal to revolution are registered in this militia ,so as you see government repress a segment(at least 30%) of own people with another part of people in Iran society and this is what i am scared from it . they are trying spread hate among people in Iran .they try to say protester are belong to up level people from uptowns and others who votes to Ahmadinejad are middleclass people and “It is a confrontation and war between poverty and wealth” and this is very dangerous for future of our society.