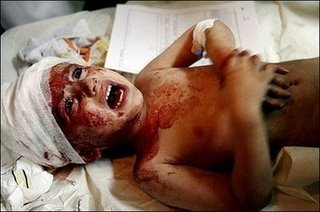 (AFP/Mohammed Abed)
Let’s promise to each other do whatever we could do to stop wars in every part of our planet .
---------------------
Update:
I really don’t want continue this issue but I can not really resist when I saw picture of Qana massacre today. Just close your eyes and imagine how is terrifying when in midnight children who were in hug of their mothers wake up with a horrible sound and with second explosion buried in ruin suddenly.
I have no doubt if such tragedy happens for Israeli residents, Israel government response with a atomic bomb and then US describe it as a self defence operation . but now because these people were second class human now they could sit in security council with enough time and discuses does security council must condemned Israel or not?

I was thinkig that they are different with their Iranian allies

After 2000 I saw Hezbollah as a political party with smart leaders, so I've thought politic and policy is more important for them instead of military action but I really shocked when Hezbollah seize Israeli soldiers
Do they did the operation to supporting Palestine people? But it is obvious that they are responsible in front of Lebanon people more than Palestine and Hamas ? I don't think that they've been so stupid that cannot predict reaction of Israel for such actions. they sacrificed Lebanon peace and calm for what reason? I eagerly anticipte to hear what is answer of Hezbollah to Lebanese .why they provoked Israel monster . Israel bombarded many parts of Lebanon which reconstructed after war by unity of Lebanese so why they must do an operation when every one know about its consequences?
why?

We condemned Palestinian but...

Israel start to attack to Gaza because an Israeli soldier took hostage by mad Palestinian militant but durning theses strikes only innocent people killed.
One person is captive instead of that they killed palestinian people until the soldier released .
This question always tease mu mind? Why Israeli residents are more important than Palestinian people for international community.
all officals in the west condemned stealing of Israel's soldier but no one never condemned Israel actions against Palestinian . every one ask both side for calm down ,but no one never asked Israel why target residential region ?
It’s seems like everyone accept the rights of Israel to do what they think it is essential for themselves. They even allowed killed kids and women because it is possible they join terrorist groups in future!
-----------
PS: in Iran evrtything is same but in a reverse manner : every one condemned Israel and describe all Palestinian as pure innocent people .